If you ask a handful of East Lansing residents what their favorite bar in the city is, it’s likely that you won’t hear the same answer twice.

A person in their late twenties might tell you that they enjoy the Tin Can Bar. The person who looks forward to dancing the night away in their brand new outfit will probably tell you their favorite bar is Harper’s. The one that enjoys being a tourist in their town will tell you that they love The Rock Bar.

All of the bars that comprise East Lansing’s drinking scene have a distinct personality. If you’re new to the area or the bar scene, here is what you need to know about each bar in order to get a taste of what makes the city’s nightlife so special.

Landshark has been in East Lansing for 37 years, but owner Joe David took over just one year ago. Since then, he has tried to make positive changes without compromising what the bar is known for.

“I have kept the atmosphere — the theme — of Landshark alive,” David said. “I haven’t touched the bones of Landshark.”

The bar is typically known for its Shark Bowl — a 20 oz to 46 oz bowl filled with alcohol. But David says that not many people are aware that the bar has a full “fresh-to-order” food menu. David revived Landshark’s kitchen, which was defunct for almost 30 years, a development that he takes pride in.

Landshark also has live music on Thursdays, when their house band, The Vodka Redbulls, typically takes the stage.

Landshark is open from 11 a.m. to 11 p.m. on Sundays through Wednesdays. They are open until 2 a.m. on Thursdays through Saturdays.

Crunchy’s offers an alternative to the typically loud, crowded bar scene, with a vibe that embraces the casual drinking experience. Inside, the walls and booths are covered in Sharpie signatures and messages. Arcade games line one of the walls. String lights wrap around the bar, cutting through the otherwise dim dining area.

Recent MSU alumnus Anthony Bowers said that Crunchy’s is his favorite bar because of how low-key it is.

“I like the social aspect that it has,” Bowers said via Facebook message. “You get a lot more conversations with people rather than going to some of my other favorite bars that have a lot of loud music and dancing going on.”

Crunchy’s is known by locals for its “Famous Crunchy Burger,” buckets of beer and live entertainment. The bar hosts local comedians on Mondays, trivia nights on Tuesdays and karaoke on Thursdays, Fridays and Saturdays.

Bowers said that karaoke night is always a “blast” for everyone involved and that song requests are always taken.

Crunchy’s is open from 11 a.m. to 12 a.m. on Sundays through Wednesdays. On Thursdays through Saturdays, they are open until 1 a.m.

The Tin Can Bar is a favorite amongst more mature East Lansing residents — those that are non-students or nearing the end of their college years. It’s home to stuffed burgers, pudding shots and over 50 Michigan craft beers.

Global and international studies senior Lily Cooper said that Tin Can is her favorite bar because it attracts a crowd that is a bit older than the other bars downtown, so it doesn’t get as crazy as other bars sometimes do.

“It’s one of the first (bars) I went to when I turned 21,” Cooper said via Facebook message. “The drinks aren’t too expensive. When school was in session we would typically go there either Friday or Saturday night. The fact that the line is usually not too long and moves quickly is great too.”

Tin Can is known for its infamous “Beer Tours” and “Shot Tours.” If you’re up for a challenge, you can receive a “tour” punch card from a bartender and work on trying all 50 items on the list. For shots, there are four different categories that you must complete: “Faygo Bombs,” “Heavy Hitters,” “Easy Peasy” and “Stiff Shots.” When you finish all the items on your punch card, you receive a tee shirt and a spot on the bar wall.

The Tin Can Bar is open from 5 p.m. to 2 a.m. They are closed on Sundays and Mondays.

The Rock Bar takes on a different angle — literally — as an East Lansing bar. On the tenth floor of the Graduate Hotel, the bar offers rooftop views, comfortable seating arrangements and a patio that encompasses summer camp vibes.

“The scenery on the rooftop to see all of campus and East Lansing is unmatched,” Bowers said via Facebook message. “I feel it’s more of an upscale bar than the other ‘college bars’ on campus. They have a wide range of drinks, and the bartenders are very skillful and make good drinks.”

The Rock Bar is known for its unique craft cocktail menu. The ‘Adult Caprisun’ is served in a plastic pouch, which offers a fun drinking experience. The ‘M.A.C. Manhattan’ and ‘Sparty Water’ take inspiration from East Lansing and MSU.

The Rock Bar is the place to visit if you want to sit down, relax and have a conversation over drinks.

“I think the vibe at The Graduate is a lot more chill, everyone sitting down just taking in the views from the rooftop,” Bowers said. “This is a bar you could run into your TA or professor at on a Friday and Saturday night.”

As a naturopath, owner Trisha Riley tries to make the drinking experience as unique and healthy as possible. Harper’s might be known for its bustling nighttime bar scene, but it’s also a brewpub that produces its own gluten-free, organic beers.

When it comes to the overall vibe of Harper’s, Riley sums it up as “eclectic.”

“We don’t have silverware that really matches ... nothing really matches,” Riley said. “It’s based upon creating a fun environment.”

Though you must be 21 or older to enter Harper’s after 8 p.m., anyone can enjoy the restaurant and patio during the day.

"We’ve got live entertainment on Wednesdays and we get all different age groups there,” Riley said. “That’s good for the community, to have that diversified age group together as one in one place, enjoying the music and enjoying themselves.”

Harper’s also hosts “givebacks”— nights where all of their cover fees go to a charity or community members in need. Riley said they are nearing $500,000 in total donations towards good causes.

“We want to have a good leadership in the community and that’s also why we do the ‘givebacks,’” Riley said. “Many of them are local in focus because we want to give back to the community as much as possible.”

Having opened in 1981, P.T. O’Malley’s is a long-time staple of the East Lansing bar community.

"I’ve talked to so many people who will come up to me and say they met inside P.T.’s and are married with kids," owner Pat Riley said. "And those kids are now back at Michigan State going to school."

With a capacity of 200, P.T.’s creates a more cozy atmosphere. There are a number of spacious booths inside in which larger parties can gather comfortably. The bar is also home to the 'Shot Wheel,' a giant wheel that you spin to decide what shot you’ll be given at a discounted price. There is also nightly entertainment, whether it be live music or a DJ.

Riley said that the bar would be introducing a new menu of food this fall, which would give students something to look forward to when they come back to East Lansing for school.

P.T. O' Malley's is open from 6 p.m. to 2 a.m. on Mondays, Tuesdays, Wednesdays, Fridays and Saturdays. They open at noon on Thursdays and are closed on Sundays.

Lou and Harry's Bar and Grill

Popularly known by locals as "Lou-Ha's," Lou and Harry's uniquely brings in the most business on a weekday.

Thursday nights have been coined "Mug Nights," where patrons purchase a 32oz mug and pay only $4 or $5 to fill it up with a drink of their choice. Mugs only have to be purchased once, and you can bring them with you to every subsequent Mug Night – making Thursday's a hit for college students looking to drink on a budget.

"Thursdays are definitely our busiest night, it's been consistently busy for a very long time," manager Shane Carney said.

The inexpensive drink options are just one part of Lou and Harry's recipe for success – the next being their kitchen, which serves food until 1 a.m., later than most other bars in the area.

Carney said that though it's not the largest bar in East Lansing, it's an interesting place that makes you feel something when you walk in. He describes it as having a “homey vibe.”

The Riviera Cafe, known by locals as "The Riv," has been a staple of the East Lansing bar scene since 1981.

The Riv hosts different specials throughout the week – Half-off Wednesdays, Twisted Tuesdays, Industry nights and RAMAs all ensure that you won't spend a fortune on drinks.

Complete with a dance floor, a photo booth, giant Jenga, a dart board and a pool table, The Riv guarantees that guests stay entertained while they drink. In addition to bar seating, there is also plenty of booths and tables, which can provide for a more private social experience on your night out.

Rick's has been a college student rite of passage since 1980. If you ask any MSU alumni from the last 40 years about their college experience, they will likely tell you about their nights out at Rick's – and ask you if the floors are still sticky enough to maintain the nickname “Sticky Rick's.”

Rick's hosts specials throughout the week, which can help explain why on some nights during the school year, the line might wrap around the outside of the building. Thursday nights are “country nights” – in which cowboy hats and boots are accompanied by a sale defined as “$3 everything,” where all single well drinks, shots, bottled beers, long islands and RedBull drinks are only $3.

Dublin Square opened in East Lansing in 2006 with the intention of “bringing a small piece of Ireland to an area already abound with culture,” according to their website.

Key design aspects of Dublin pay homage to Dublin and Irish culture – the hand-carved bar was constructed in Dublin, and the Guinness barrels are made from metals from the railroad tracks that led to the very first stout brewery of Ireland.

During the school year, you will find Dublin Square to be bustling with people on the weekends or on game days. At least once, you will enthusiastically wait in a line that reaches down the road because Dublin is complete with a dance floor, a full food menu, a patio lit by string lights and enough “craic” for all.

FieldHouse is a sports bar that seems to have it all. With a patio situated outside facing downtown East Lansing, the outside seating is a perfect option if you like soaking up the sun – or people-watching. Inside, you can find a full bar, a DJ, live music on the weekends and trivia.

FieldHouse has a complete food menu that includes some Spartan flair. You can order the “Go Green” and “Go White” wings, sandwiches named after the Jenison Fieldhouse and the Breslin center or the “Sparty Sliders.” On Saturdays, FieldHouse offers a brunch menu from 11 a.m. to 2 p.m. FieldHouse also has vegan, vegetarian and gluten-free options.

The bar also has an exclusive second-floor space complete with a private patio that overlooks the city. The space is open to private parties by reservation. 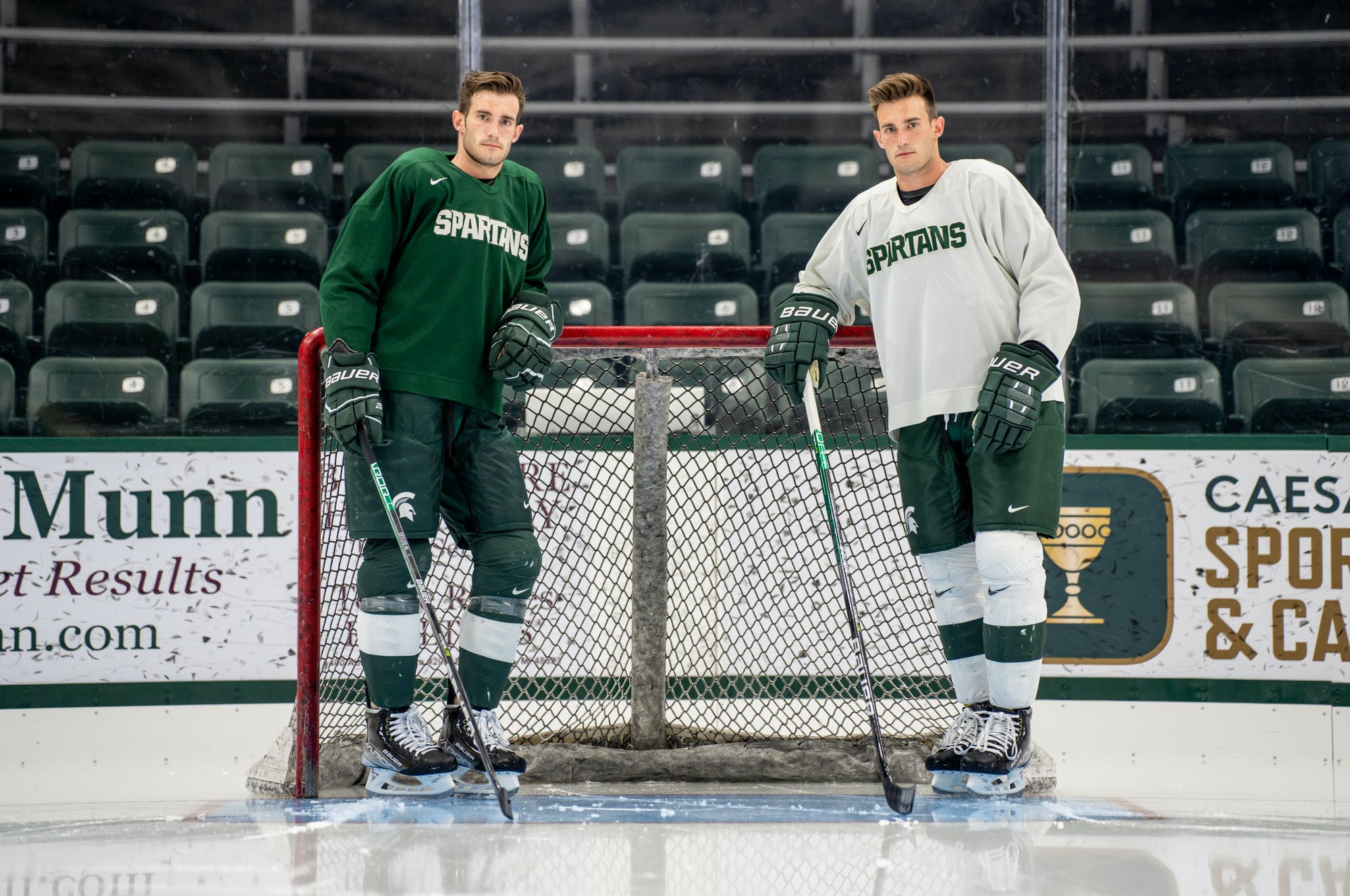 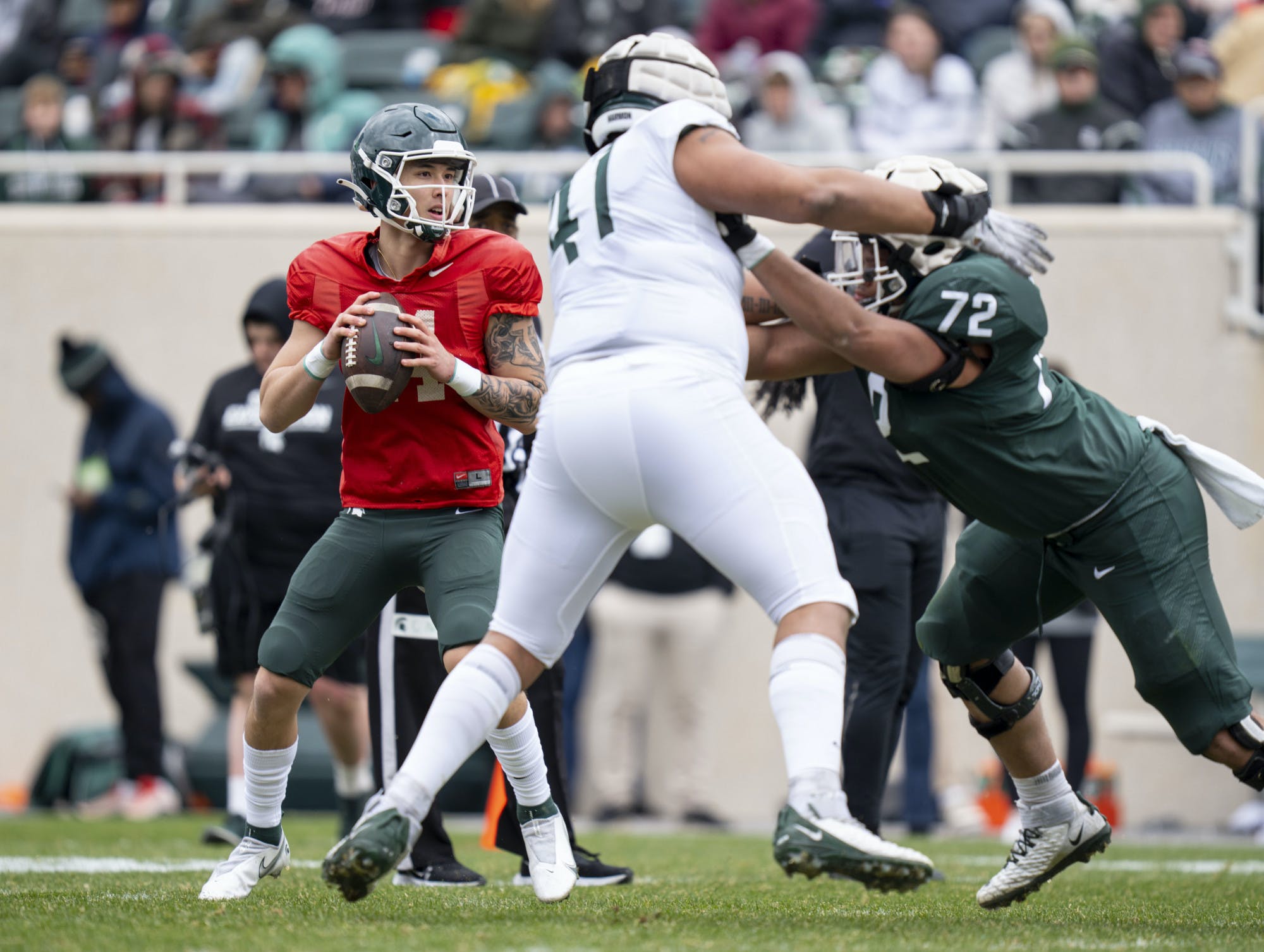 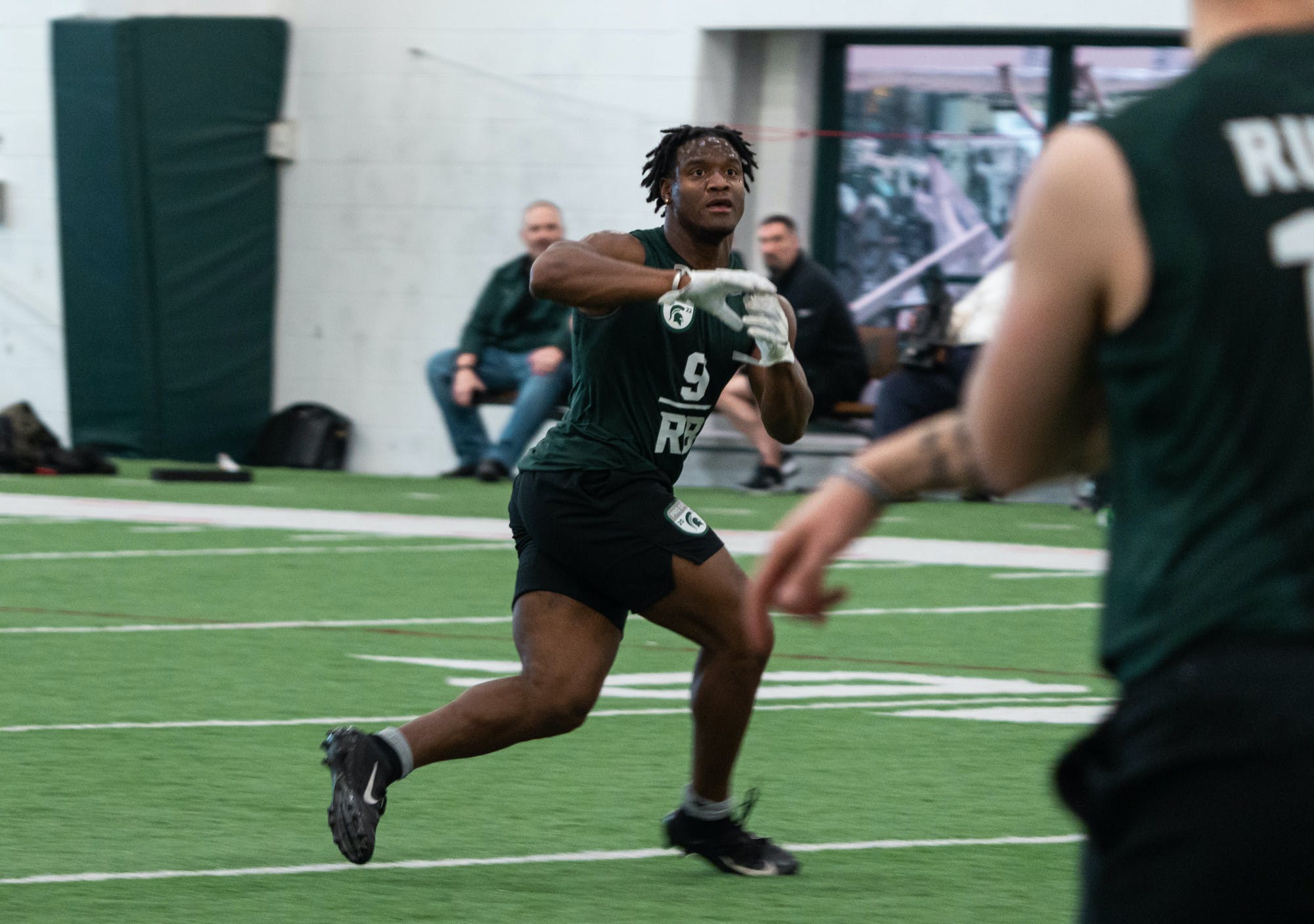 Kenneth Walker III begins his final path to the draft, offers his farewell to Michigan State