A student is studying in a study room at the Minskoff Pavilion on July 25.

For students like computer science junior Chris Lu, exams and academic stress can be damaging to one’s mental health and can hinder one’s overall ability to function.

“By college, I’ve grown numb to it,” Lu said. “I study like a ... machine for weeks and then three days before the exam, I crash hard and binge-watch ‘Code Geass’ and surreal meme videos.”

The pressure to do well on exams may cause students to neglect their well-being and avoid basic self-care in order to study instead.

Lu said they tend to stay in their room alone when they’re overwhelmed.

“I’ll feel like eating regularly, taking breaks, talking to friends or even showering for 15 minutes are a waste of time because I should be studying instead,” Lu said. “I’ve gotten better at not doing that, but ... those are my lowest points.”

Lu’s experience echoes those of students who feel overwhelmed during final exams and during other parts of the semester.

“Final exams — you just say that word to students, and it seems to be just a stressful phrase,” said Mark Patishnock, director of Michigan State’s Counseling and Psychiatric Services, or CAPS. “I think students can often times feel very overwhelmed. I think final exams are reminders of us being evaluated ... through a performance level that’s associated with a grade.”

Because final exams are often a larger percentage of a student’s overall grade, there is increased pressure to do well on them, Lu said.

To some students, final exams are rigid and permanent, and knowing that makes them want to perform well.

“You have very little flexibility in when and where you do (final exams),” Lu said. “You’re under time pressure. There’s no forgiveness, redos or recovery unless you want to retake the class, and even if you retake the class, that grade will still be on your transcript forever.”

“I think it really depends upon the degree to which it impacts somebody,” Patishnock said. “So, if somebody has anxiety, we know it’s too much when we’re not able to function at the levels that we have normally been able to. We might feel the need to socially withdraw from folks. We may not be able to concentrate or focus on our schoolwork or study because we are just so nervous and anxious about the grades we may or may not be getting.”

Exams in general can be stressors for students, especially if they don’t know what to expect.

“For some people, the first exam is the most stressful,” Lu said. “Some professors are really good at communicating what to expect on the exam, the format, the types of questions, the material covered ... and provide practice exams with keys and explanations. But if the professor doesn’t, then students may feel most stressed around the first exam because they don’t know what to expect or how hard they’ll be graded.”

One way students can be proactive in addressing the effects final exams have on their mental health is to remember they are a person first, Patishnock said.

He said it’s important to take care of yourself as a student.

“I think that one thing we can do is really take the best care of ourselves,” he said. “If you think about it, we tend to take pretty good care of our devices, right? ... We feel the need to plug them in and charge them up and to make sure they get updated, are refreshed or that we restart them. We generally know that we rely on that device and if it’s not taken care of, it’s not going to function well. We generally know that, but I think sometimes we forget to do that for ourselves.”

Lu said they recommend staying in contact with those who understand what you’re going through, such as friends, professors or counselors.

“I talk to my high school friends. We’re all ‘gifted students,’ so we have that shared experience of tying our self worth to grades. (We’re) learning to unlearn that, but still valuing academic performance highly today,” Lu said. “I don’t talk to them looking for advice. We all know the responses to give and receive because we’ve been on both sides many times, but just confirming that someone cares enough to listen and respond is usually enough to make me feel a lot better.”

Above all, Patishnock said he wants students to remember the stress, anxiety and other negative emotions students get from final exams and other academic pressure is completely normal and treatable.

“I would just tell them that if they are experiencing anything where they are feeling overwhelmed, I just want them to know that what they are going through is normal. It is not unusual, there’s not anything necessarily wrong with them, per se,” Patishnock said. “Thousands, and I mean thousands, of students at MSU come to CAPS every year to talk with somebody, and there’s no minimum or maximum threshold what someone’s going through to at least come in and get the process started.” 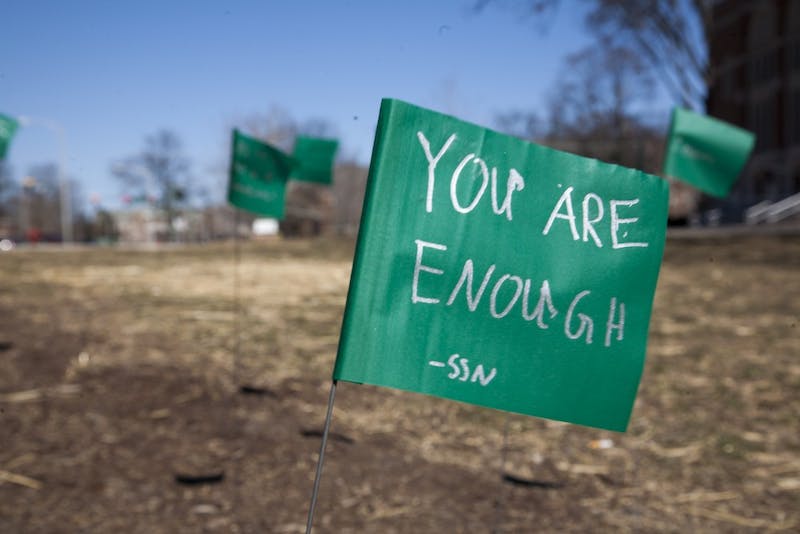 'You can be impacted in a lot of ways by suicide': Understanding loss, how to help

Data from Michigan State's counseling screening shows that 44% of students reported some degree of suicidal ideation within a two-week period. Through ...