The defense was the factor that decided the Spring Game, and with last season’s bout with injuries, defensive coordinator Mike Tressel played his starters conservatively for the April 13 scrimmage.

“(We’re) always rooting for success, for offense and defense as well,” senior linebacker Joe Bachie said. “I think it’s going to be a special fall for us.”

For the first half of the scrimmage, the first string defense had reps against the second and third string offenses, challenging players like redshirt freshman quarterback Theo Day and sophomore wide receiver C.J. Hayes like they’ve never been challenged before.

Day and Hayes saw very limited time last season and were forced to play up to the pressures of game day in front of thousands of Spartan fans for the first time of their college careers.

Bachie played a limited amount of snaps, but made his presence felt on the field.

Bachie, a three year letter winner for the program as well as a captain last season, said that his time with this group of players has boosted his role as a leader, a trait he feels he was meant for.

“It’s just a second nature,” (1:00) Bachie said about his role on the field calling plays. “I go out there and I don’t even think about it. The great thing, being a leader, like a linebacker, you need to be able to get everyone set and then also do your job.”

Junior cornerback Josiah Scott was also on the reserves for the day, but made his signature play in the third quarter, picking off senior quarterback Brian Lewerke to give the green team their first lead of the day.

After the first pick, the defense forced two fumbles and freshman defensive end Zach Slade picked up another interception thrown by Rocky Lombardi.

“It was a great game, I felt like I played well, deeps played well. There were a couple times we gave up some explosives and we want to eliminate (them), but overall we got the turnovers that we need to win a game,” Scott said.

The defense has put it upon themselves to find 22 starters before the season rolls around.  With the season opener on Aug. 30 against Tulsa in East Lansing, players like senior linebacker Tyriq Thompson said that the spring has pushed Tressel’s goal forward.

“We’re still working, we still have fall camp to go, but I feel like a lot of guys have made strides forward and we’re pretty close to (our goal,)” Thompson said.

Thompson, now considered a veteran, has gained experience in last season with the plethora of injuries for the defensive starters.

Now viewed in a different light by his teammates and coaches, Thompson plans on stepping up for the defense in his final year at MSU.

“Leadership is definitely one of my biggest goals,” Thompson said about his goals for the upcoming season. “Trying not to miss any tackles or anything like that. Just making all the plays that I should make. … I’m just going to play the defense and do the best I can.”

Thompson had reps most of the game in the linebacker position with the first group defense, and had several pass break-ups and tackles. 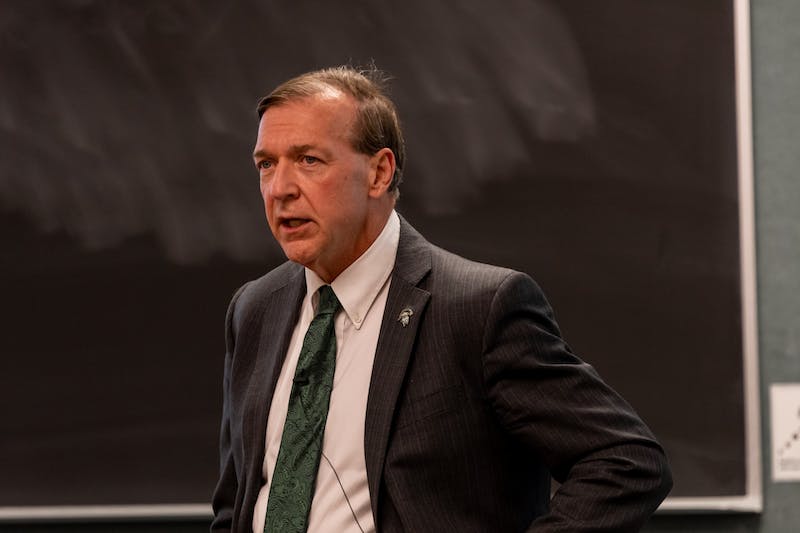