Michigan State solidifies bowl eligibility, beating Maryland 19-16. Despite a five-game losing streak, the Spartans are now 6-6 and are on their way to a bowl game, the 12th under Dantonio. There was a lot on the line today as it was MSU’s Senior Day. It seems like the seniors weren’t ready to take their green and white off just yet.

Quarterbacks on both sides of the field struggled in the first half. The Terrapins picked off two passes in the first quarter as senior Spartan quarterback Brian Lewerke struggled to place the ball. Lewerke ended the day 30-for-40 from the pocket. The senior has thrown 11 interceptions in the last seven games.

"At the end of the day a win's a win," Lewerke said. "Our sixth win, and we're going to a bowl and that's the minumum standard around here."

Terrapin quarterback Josh Jackson struggled to connect on passes as well, going 11-27. The Spartan defense took advantage of the shortcoming and snagged two fumble recoveries and one interception.

MSU kicker Matt Coghlin scored the first points of the game with a 40-yard field goal. Maryland responded with two interceptions, followed by a 44-yard pass for a touchdown at the end of the first quarter.

Lewerke’s inability to get the ball to the end zone forced MSU to trail 7-6 after another field goal from Coghlin. Lewerke began to find chemistry with his receivers, freshman Tre Mosley and junior Cody White, at the end of the first half.

Lewerke’s ninth rushing touchdown of his Spartan career propelled MSU to the lead 13-7 at the end of the first half.

In the fifth game of his career, Mosley ended the day with eight receptions for 73 yards. He has now burned his redshirt due to the fifth appearance, but Mosley just wanted to play.

"It's good that we have the depth to rotate guys in and out," Mosley said. "We all make plays."

The Spartans were hindered by turnovers, causing a lack of momentum on offense. MSU collected four penalties for 40 yards. Luckily for the Spartans, defensive forces Mike Panasuik and Kenny Willekes held off the Terrapins. All of them except running back Anthony McFarland.

McFarland was able to escape the MSU defenders to go on a 63-yard run for a touchdown early in the second half. This put the Spartans down 16-13 until 9:30 in the fourth quarter. Coghlin tied the game 16-16 after a made 32-yard field goal.

"I always think I have high confidence," Coghlin said. "I know they trust me to make it. ... If I don't make it, I look at that as kind of a fluke. I'm supposed to make all of them, I think."

The clock winded down, but Lewerke picked up the pace. Freshmen Anthony Williams Jr. and Julian Barnett were Michigan State's hope for a lead. The two had a combined 48 yards in the fourth quarter and helped push the Spartans to the red zone with 2:53 left in the game.

Just 2:14 to spare in the game and Coghlin makes a 33-yard field goal to put MSU in the lead, 19-16. The Spartan defense held the Terrapins at 16 the rest of the game to seal the victory and end the day.

"I didn't think about this being my last game in Spartan Stadium until it was over," senior defensive lineman Raequan Williams said. "I almost started crying."

MSU will hope to snag a bowl game win before the season ends. The Spartans will find out their postseason destination in the next two weeks. 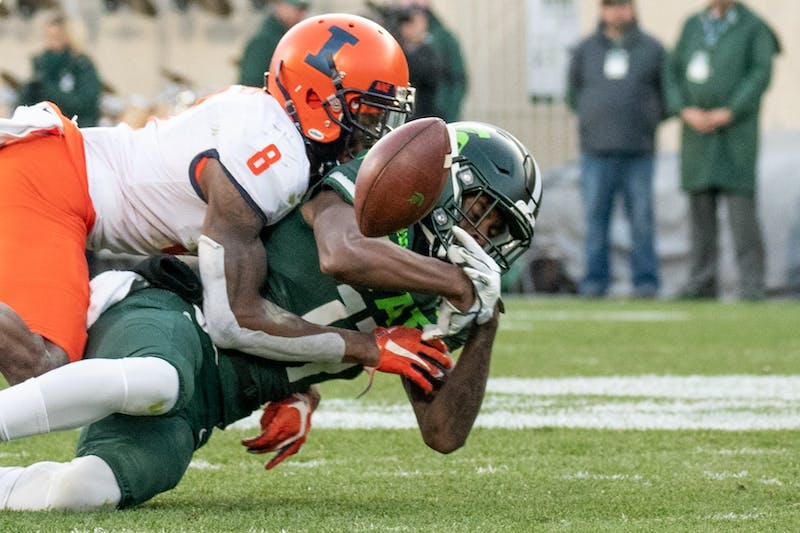 The Illini upset the Spartans in East Lansing. 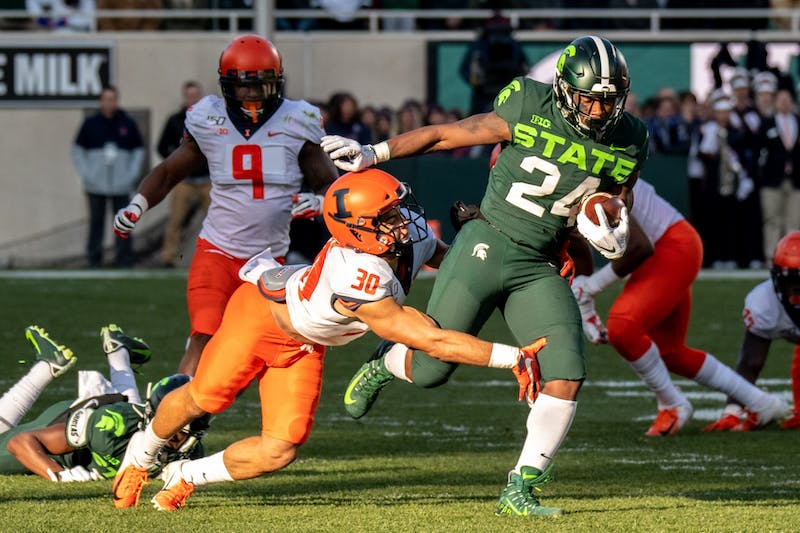 Halftime Thoughts: Neon jerseys and offense return for Michigan State in first half against Illinois

The Spartans take a sizable lead into the break.