College affordability: How managing expenses takes a toll on students

Mathematics senior Miracle Chatman stands for a portrait on Sept. 12, 2019 outside of the Student Services building. Sylvia Jarrus | The State News
By Karly Graham

Hundreds of thousands of dollars for tuition, thousands for housing, hundreds for books, food and transportation — these are just some of the costs of being a college student.

In order to afford these expenses, students at Michigan State often have to stretch themselves too thin to make ends meet.

Sharron Reed-Davis, a political science and pre-law junior and the president of the Black Student Alliance, or BSA, works two jobs on top of classes and her leadership roles.

“It’s really hard,” she said. “I think I just find time at odd hours to do stuff for school — whether that’s going to the library at odd hours of the night or trying to get it in between classes or at meetings or something like that.”

For neuroscience senior and Vice President of BSA Keilyn Broussard, struggling to complete her schoolwork sometimes interferes with her performance at work.

“I find myself breaking the rules just to get things done, like studying for exams and what not, just to get by,” she said. “It’s really difficult — it’s more difficult than people talk about.”

MSU’s switch to a flat-rate tuition model this semester — an effort to push students to graduate on time — means students taking 12 to 18 credits will be charged the rate of 15. For some students, the 12-credit rate is all they can afford, but that is no longer an option.

“It’s been hard because I still want to get my money’s worth, but I also just can’t handle it — I’m a student leader,” Reed-Davis said. “People expect us to handle it and have it together, but I think we’re the worst off sometimes because it’s definitely a huge disadvantage because we still have to do the leadership stuff, go to meetings and work two jobs.”

Mathematics senior Miracle Chatman, the chief diversity equity and inclusion officer for the Associated Students of Michigan State University, manages 30-hour work weeks on top of being a full-time student. Managing her time — as well as her finances — takes a toll on her.

“It’s definitely pretty stressful,” she said. “I don’t know the way I manage it, but I have no option but to manage it. So now when my grades slip a little it’s because I have to work more, but if I don’t work more, then I don’t eat.”

When it comes to managing finances, Terry Clark-Jones — a financial management educator with MSU Extension — said one of the first mistakes any student can make is taking out too much in loans.

“When they get their financial aid package, they get all excited when they see all the money they can borrow,” Clark-Jones said. “They take all of it, and that’s not good.”

She said creating a financial plan and mapping out semester costs would help students combat this problem, as well as only taking out loans they really need.

“I think emotions get in the way sometimes. When I teach, I always tell folks that financial management is 75% emotional and 25% math,” she said. “Sometimes we get kind of emotional about money and then we spend money that we don’t have.”

Tuition for in-state freshmen is $14,524 for those taking 12-18 credits, and room and board for students with silver dining meal plans is $10,522. That makes the total cost of college for freshmen $25,046 — before additional school expenses like books and materials needed for classes.

For out-of-state students, tuition is $39,830 and room and board is the same — putting their total cost at $50,352. And for international students, it’s even higher.

Loans and financial aid are harder to come by for some students. Free Application for Federal Student Aid, or FAFSA, is based on the income of parents, so students paying for college out of their own pockets are often left with little government aid.

Journalism freshman Bella Gorisek pays her own tuition, but because her parents have a stable income, said she wasn’t granted much financial aid.

“It’s really aggravating the way that works, because a lot of the time, parents don’t pay for students,” Gorisek said.

Originally from Pittsburgh, the price Gorisek pays for her out-of-state tuition is higher than the average student. She said she dreamed of coming to MSU ever since she was a sophomore in high school, but the soaring costs of attending almost interfered with that goal.

“Honestly, I wasn’t going to come here because of how expensive it was for me,” she said.

Gorisek saved money from her summer jobs in high school to help pay for school. And in college, she continues to work — now in a job related to her field of study.

For pre-nursing freshman George Sinnott, textbooks are the most frustrating expense.

“One of my professors made me buy a textbook that we use maybe once a week,” he said. “I thought since I paid like 70-something dollars for this, I figured it’d be something we would use every class, or at least more often than we do, so that can be pretty frustrating.”

For example, broadcast journalism junior Bryanna Idzior said she purchased $200 to $300 worth of supplies and equipment one semester. One of her classes requires her to travel to report from different communities that are sometimes 20 to 30 minutes away, so she foots the bill for gas as well.

“Obviously, school itself is very expensive, but I chose to go to a Big Ten university, so I knew going in it was going to be a lot of money and a big investment,” Idzior said. “The thing that affects me the most on a day-to-day basis is just that MSU has so many (students), and it’s such an expensive school that sometimes they just don’t realize how much we do struggle.”

“I believe that the students and the parents are getting better at preparing themselves for that transition and getting a better handle on that,” Clark-Jones said. “There’s more resources out there and since we have a bit of a student loan crisis right now, people are much more thoughtful as they move forward with preparing themselves for that transition.”

In order to encourage positive spending habits, Sinnott said his parents limited how much he could spend during high school. Now, those reins have been taken off.

“It’s my first time being in total control,” he said. “But I still want to be responsible, so I still keep myself under that limit because I thought it was a good way to make sure I’m spending money responsibly.”

Despite this, Clark-Jones said being well-prepared doesn’t mean there won’t be curveballs.

“There’s a bit of a learning curve there, particularly for somebody’s first child going off to college,” Clark-Jones said. “Learning FAFSA, learning about the financial aid packages that they get for the schools that they’re interested in. ... But I think that there’s more resources available, and I think that the high schools are getting better at that — at helping people prepare.”

The MSU Office of Financial Aid is located in the Student Services Building. 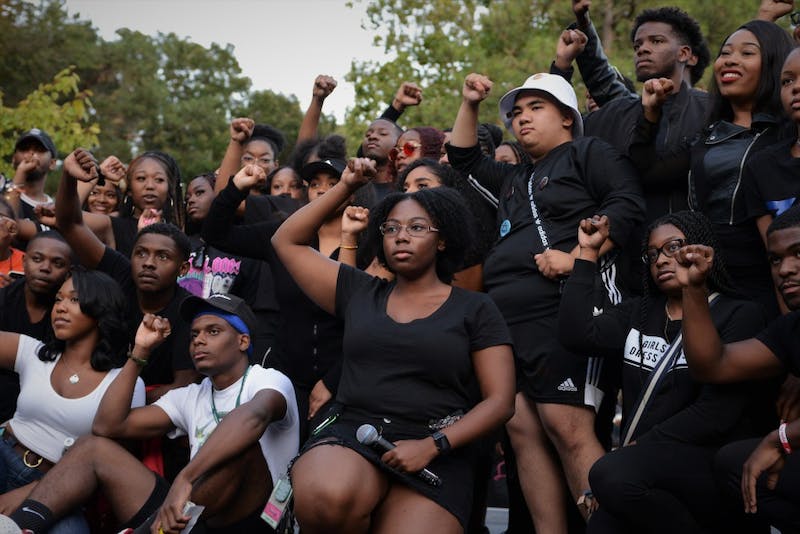