Sometimes that is all it takes to make a lifetime's worth of memories.

Fifth-year Michigan State quarterback Brian Lewerke may not have fully understood that before. After Monday night, he won't forget it. Neither will 15-year-old cancer patient Justin Cole.

This week, the Michigan State football team is playing its biggest game of the season against Maryland. It is playing for an extra month of football and another bowl game berth, the 12th in Mark Dantonio's tenure. Lewerke and the other 20 Spartan seniors are playing to prolong their college football careers — at least for one more game.

It wasn't long ago when Lewerke was considered a possible Heisman Trophy dark horse off of a 10-win redshirt sophomore season in 2017 and prepared to lead a young Michigan State program back to the Big Ten Championship game. Instead, the Spartans have won 12 games over the last two seasons.

This year, with multitudes of senior leadership on both sides of the ball, Lewerke and his teammates spoke of plausible goals of reaching Lucas Oil Stadium come next weekend. The Spartans are instead in a fight for any sort of postseason opportunity.

To say this week is suffocated with pressure is an understatement.

But Monday night, MSU's quarterback found time to get away from it all. Following the day's practice, Lewerke spent his night at Sparrow Hospital in Lansing, Michigan and teamed up with Wish Upon A Teen to decorate Cole's hospital room.

“He’s going to be in there for another month or two, so we just tried to make it a little more homey, a little more inviting for him,” Lewerke said following practice Tuesday evening.

Cole is as big of a Michigan State fan as they come. He played football. He was a quarterback. He wore No. 14. Naturally, Lewerke is his favorite Spartan player.

And he had no clue what was going to happen that night.

This all came together when Nancy Sovran, the Executive Director at Wish Upon a Teen, reached out to Takudzwa "TK" Kubvoruno. At 26, Kubvoruno owns University Viral, a collegiate events, travel and entertainment company. He played football for Michigan State during the 2011-12 season before pivoting down the entrepreneur route.

That connection helped Kubvoruno touch base and bring up the idea to Lewerke, and there was no hesitation from the senior quarterback.

“Obviously I try to use my platform," Lewerke said. "It's crazy to think people want me to show up there just because (of) who I am. I just try to go there and give him a good time for a little bit and hopefully raise his spirits and be a positive light for him.”

Lewerke arrived at Sparrow around 8 p.m. He walked into Cole's room, dressed in a Michigan State sweatshirt — the top half white, bottom half green — stopping when he was at bedside. Cole laid flat on his back, tired from another day of treatment.

“Hey, I heard you wanted to see me. My name is Brian Lewerke,” Lewerke said, according to Kubvoruno.

“Duh, of course you are Brian Lewerke," Cole said.

Just like that, a night of friendship began. They talked football. Cole mentioned he wore No. 14 but was bummed he had to switch to No. 11. They also talked about video games. For just a short moment, Cole's mind wasn't thinking of pain.

“I think he was really shocked but as it sunk in more you could just tell it meant the world," Kubvoruno said. "He might have had low energy just from going through treatments the whole day. But you could tell it was a moment that meant a lot.”

Lewerke adorned the room in green and white — there weren't really any other options. He signed a plaque which scripted out Michigan State's fight song. Kubvoruno said Lewerke helped out from start to finish.

“It goes to show his maturity. I think that Brian is going to have a great life after football," he said. "It just goes to show the amazing job Brian’s parents did and just the character that he has as a person.”

And just like that it was time for Lewerke to leave. He was there for less than an hour. But it will be remembered for a lifetime.

“It puts things in perspective, for sure," Lewerke said. "I love helping out people. I think that’s something I've been passionate about since I was younger. When you play football, it gives you an opportunity to do that, also being a quarterback too, people know your name, it gives you a lot of opportunities to be a light to people.”

Brief moments like this push Sovran to continue to help make differences in suffering children's lives.

"It was amazing and for that half hour that we were there (Cole) was smiling, and the joy on his face was forgetting the difficult time, for just a short period of time, that he is going through and that joy is so wonderful,” she said.

Lewerke has played in big games throughout his Michigan State career. Perhaps his most important comes against a 3-8 Maryland team that will show up to Spartan Stadium only to play spoiler. To end college football careers.

Lewerke's final game at Michigan State may be Saturday. It may be in a month. Time is constrained, constantly ticking away.

There's presumably a list of places and things he could have been doing on a weeknight — preparing for the game being one of them. He spent it, instead, changing a life.

“There's things that are bigger than football," Lewerke said. "My schedule is busy, but it's not like it's horribly busy. I still got time to go do stuff like that, and I want to make time for people like that, too.”

Wish Upon a Teen is a 501(c)(3) organization dedicated to providing resources, time and opportunities to teenagers with severe life-limiting medical conditions. Their website is https://www.wishuponateen.org. 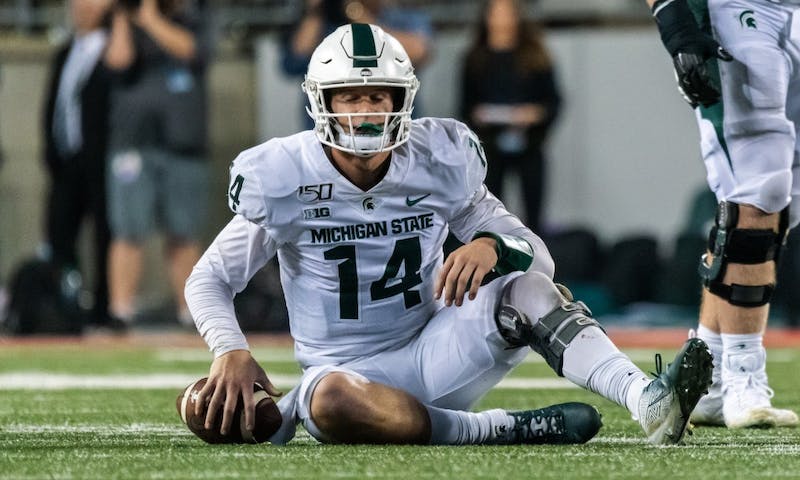 'As your quarterback goes, so does your offense': Brian Lewerke looks to return to winning football ways

MSU's senior signal-caller seeks to improve his level of play amid offensive struggles.