5 places to cry at MSU

Changes to MSU Title IX, an office transformed by scandal

In a quiet corner of Olds Hall, Robert Kent leads Michigan State’s Office for Civil Rights and Title IX Education and Compliance. He sits at his desk rapidly typing up emails, returning phone calls and scheduling meeting after meeting.

The Michigan Attorney General's Office executed search warrants in relation to their investigation into gymnastics coach John Geddert this morning, according to a statement from the department.

From Simon to Stanley: MSU's struggle to find leadership after Nassar

This week on The Dinner Table podcast, Tessa and Griffin discuss recent talk of war with Iran, what people were saying about it on social media and what international relations looks like moving forward. To unpack this subject further, they spoke to Robert Brathwaite, assistant professor in the MSU James Madison College. 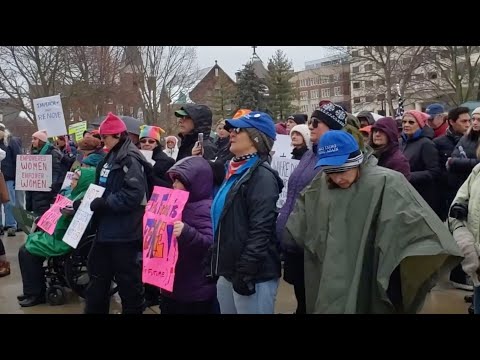 Hundreds of people of all ages gathered for the Women's March on Lansing at the Capitol on Jan. 18, 2020.

Amid rain, snow and cold winds, the 2020 Lansing Women's March took place on the front steps of Michigan's Capitol Saturday. The rally was held by the Blue Brigade of Lansing, a group that volunteers for campaigns at the local, state, and national level.

Michigan State wrestling (4-5) could not overcome a No. 5 Minnesota Golden Gopher (7-3) early 9-0 advantage in their third loss of the Big Ten season, losing 25-10.

How Nassar’s cases, MSU’s response made waves in lawmaking

Michigan State has paid more than $498 million in settlements to survivors of Larry Nassar, former MSU doctor convicted of sexually abusing hundreds of women and girls.

Reports of student illness on campus after eating in dining halls

Michigan State University health officials have received reports of some students experiencing gastrointestinal symptoms, which could be a result of eating in the dining halls.

President Samuel L. Stanley Jr. announced in an email to his senior leadership team Friday that senior advisor to the president for diversity Paulette Granberry Russell will be transitioning within the next year or two, according to Emily Guerrant, MSU's spokesperson.

Michigan State Police has suspended the use of all 203 Datamaster DMT, or Datamaster transportable, evidential breath alcohol testing instruments after opening an investigation into potential fraud committed by contract employees of the Datamaster vendor, Intoximeters, according to a statement issued by Michigan State Police, or MSP, Col. Joseph Gasper on Jan. 13.